Adventures in the life of a gorram nerd

Recently, I purchased these fat quarters from the Sylvia Collection by Lotta Jansdotter. I had 4 white and 4 black and 1 that I was hoping would read as in between. I liked that each of the 4 prints had an inverse, since I’ve been playing with inverses lately. 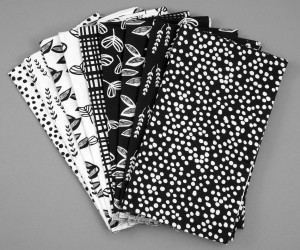 Some sketching and math later, I came up with this block. I was able to get 16 squares of each FQ which make 16 of those blocks, which is a lovely number in quilt.

When I got the fabric cut and the HSTs sewn and laid out, the fabrics read busier than I was planning on and the design gets lost. The other problem is that the fabric that I wanted to read as in the middle was reading as black.

I played with a few other arrangements before deciding on the one with the black on the outside and white in the center. 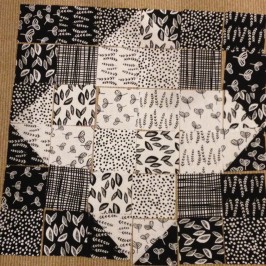 A few hours later, here’s the finished quilt top! The quilt top is about 48″ square. While I was in Tucson, I donated the quilt at Quilter’s Market.

If you have any questions, feel free to reach out to me at gorramquilts [at] gmail [dot] com